2017 Best Places To Travel for Business

2017 Best Places To Travel for Business

U.S. employees take more than 488 million business trips every year – an average of 1.3 million trips every day. And they’re traveling all over – from major hubs like New York and San Francisco to smaller cities and towns across the country. Projected spending on business travel for 2016 was $318.9 billion.

Traveling for work can be stressful – you’re in a new city where you might not know anyone, and you probably don’t know your way around. But being in a area that’s great for business travelers can make business trips simple – and even fun.

We ranked nearly 400 metro- and micropolitan areas across the U.S. to determine just where the best places for business travelers are. We evaluated each area on metrics like amenities, commute time, number of businesses and more. And we found that great destinations for business travelers span the entire country – large areas and small, East Coast and West, and everywhere in between.

Read on to see our methodology and rankings, including the top 100 places for business travelers!

To find the best places for business travelers, we evaluated metro- and micropolitan areas in four areas: 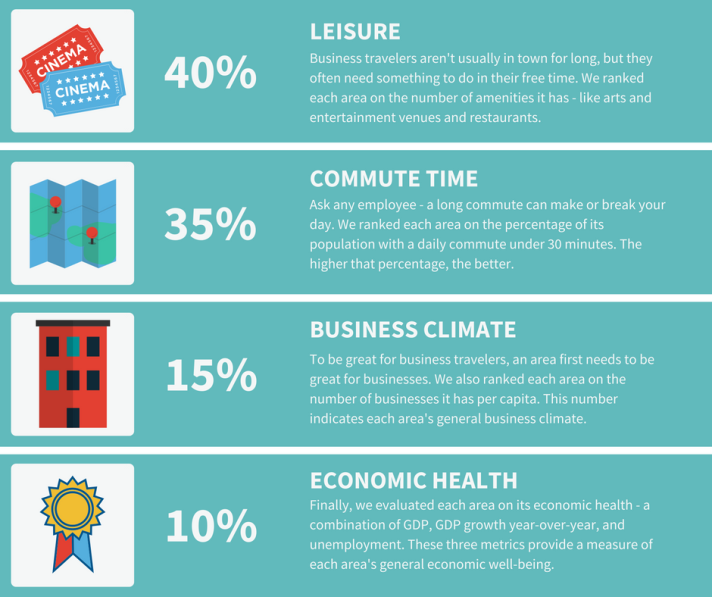 Below are full metrics for the top 100 places for business travelers. See the rankings below, plus a geographic distribution of the top 50 places and a link to the full data set. 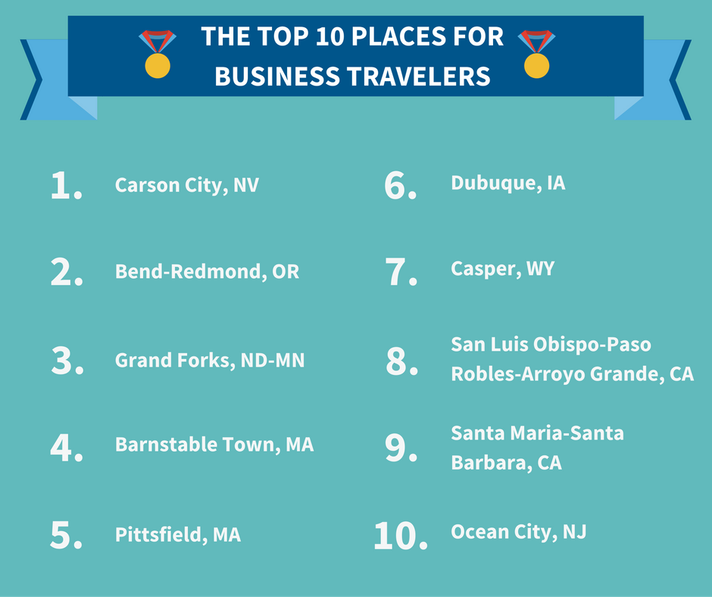 We evaluated nearly 400 metro- and micropolitan areas across the United States on the following four areas, using data from the U.S. Census Bureau and Bureau of Economic Analysis.

Leisure: This represents the number of arts, entertainment and restaurant venues per capita in each area and makes up 40% of our overall score. Source: U.S. Census Bureau

Commute time: This represents the percentage of each area’s population that has a daily commute of 30 minutes or less and makes up 35% of our overall score. Source: U.S. Census Bureau

Business climate: This represents the number of businesses per capita in each area and makes up 15% of our overall score. Source: U.S. Census Bureau

Economic health: This is made up of the three economic metrics below and represents 10% of our overall score. Source: Bureau of Economic Analysis

Thank you for your inquiry!

Check your inbox for a response from Churchill Living!

Thank you for your inquiry!

Check your inbox for a response from Churchill Living!

Thank you. Your message has been sent. A representative will contact you shortly.